This documentation is for the deprecated Transitland v1 platform.

Every route in Transitland has a vehicle type. The list of allowable vehicle types is drawn from the GTFS specification and Google's extended list of route types.

Unlike within GTFS feeds, Transitland allows route vehicle type to be queried by either a numerical code (e.g., 0) or text (tram). Both will return the same set of results. The route data model is always returned with the text form.

RouteStopPatterns' stop_distances are useful for cutting a slice of the route line between two stops for visualization, among other reasons. Each ScheduleStopPair has an associated RouteStopPattern. In addition, two attributes have been added to ScheduleStopPair: origin_distance_traveled and destination_distance_traveled. These are the distances, in meters rounded to the nearest decimeter, of the origin and destination stops along the line geometry from the start point.

The algorithm for calculating stop_distances must first solve the problem of matching stops to a set of optimal segments of the route line. A set of segment matches for the RSP stops is optimal if the distances between the stops and the nearest points of the chosen segments are minimized, with the constraint that distances along the route line of the nearest points of the chosen segments (stop_distances) are increasing for each subsequent stop.

The current algorithm runs as follows, with some details omitted. First, it computes reasonable segment matching possibilities for each stop based on a threshold of how far the stop is from the segment. Then for each stop in order, the algorithm loops through each segment match possibility in sorted order of distance from the line, until it finds a list of all subsequent stop distances along the line ahead that are in increasing order. Each stop's segment evaluation results in a recursive call to the next stop. Recursion is valuable because a poor segment choice for one stop can cause inaccuracies that aren't apparent until much later along the stop pattern for other stops.

The distance threshold for segment matches is computed for each RouteStopPattern, and its value is computed as follows. Imagine the two triangle legs formed by the average of all stops' minimum distance to the line and half the average distance between the two neighboring stops on either side of a single stop (so the threshold value can be different for each stop). The threshold value is the length, in meters, of the hypotenuse formed from these legs. 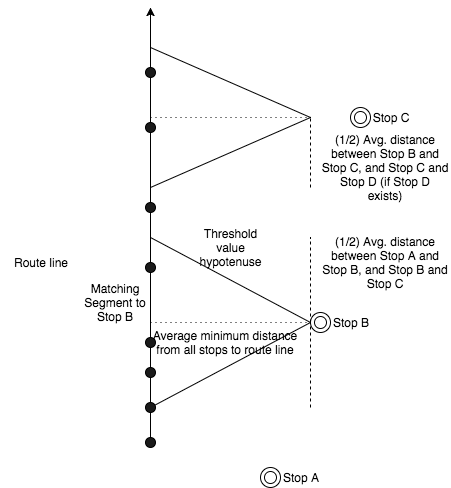 Before and After Stops

Sometimes stops at the beginning and end of route lines are found to be off the route line. The algorithm needs to identify these stops so that their distances can be set to 0.0 meters for stops before the route line, and the length of the route line for stops after. Here are the conditions for determining these "before" and "after" stops. The examples are for "before" stops, but the same logic applies in reverse for "after" stops. A stop is considered to be before a RouteStopPattern line geometry if its point satisfies one of two conditions:

The main RouteStopPattern API endpoint is https://transit.land/api/v1/route_stop_patterns. It accepts the following query parameters, which may be freely combined.