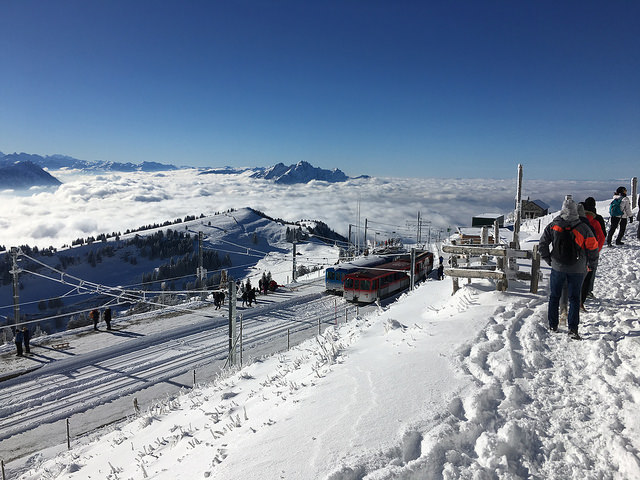 Looking west from Mount Rigi-Kulm and you can see the cloud layer that prevents you from seeing Lake Lucerne. The two cog railways are parked in the middle.

A month ago I hopped over to Germany to start a holiday trip over Christmas and the New Year. I flew into Frankfurt but I would be returning to Chicago from Zurich, Switzerland, almost three weeks later. I had spent two hours in Zurich in 2016 on a layover, and I was struck by the city's beauty and their amazing public transport system. I made it a priority to revisit Zurich, to have a proper stay.

Before I left, I was already working to import the single GTFS transit feed for the whole country into Transitland, so I was aware of some of the transit systems. That work continues because the feed is massive; it has more than 400 operators and I need to add metadata about each of them.

I arrived the night before my mountain trip to a hotel – a 3 minute walk to the nearest entrance to Zurich's hauptbahnhof (main station) – and I spent that whole evening planning an epic transit and mountain adventure the next day. (I stayed in because it's also pretty expensive to go out in Zurich, so I was also saving my money for what turned out to be an _expensive _ epic trip.)

When in Switzerland, I figured, you should spend time outside on a mountain. And there's no exception in the winter. 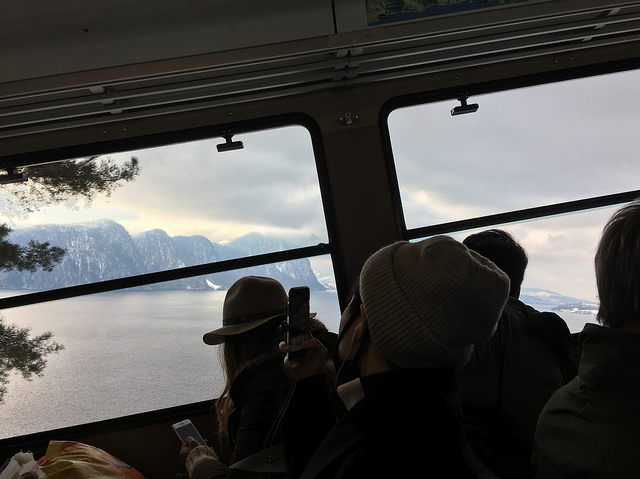 It's a cog railway up a Swiss mountain, of course it's going to look steep like this.

Mount Rigi has multiple peaks, the tallest of which is Rigi Kulm at 1,798 meters, and you can plan a trip directly there with a single app.

You can use the Swiss Federal Railways (SBB) smartphone app or website to plan a trip from anywhere in Switzerland to the cog railway station below the restaurant atop Rigi Kulm. Seriously.

I wanted to use as many modes as possible, and I don't like going on the same route more than once, so I adjusted SBB's recommended route to travel from Zurich to Rigi Kulm via Lucerne and Vitznau. This was my outgoing itinerary:

After spending about five hours on the mountain – I took a small cable car to a second peak – I heaaded down the mountain on a different cog railway to Arth-Goldau, a valley town with InterCity train service direct to Zurich. 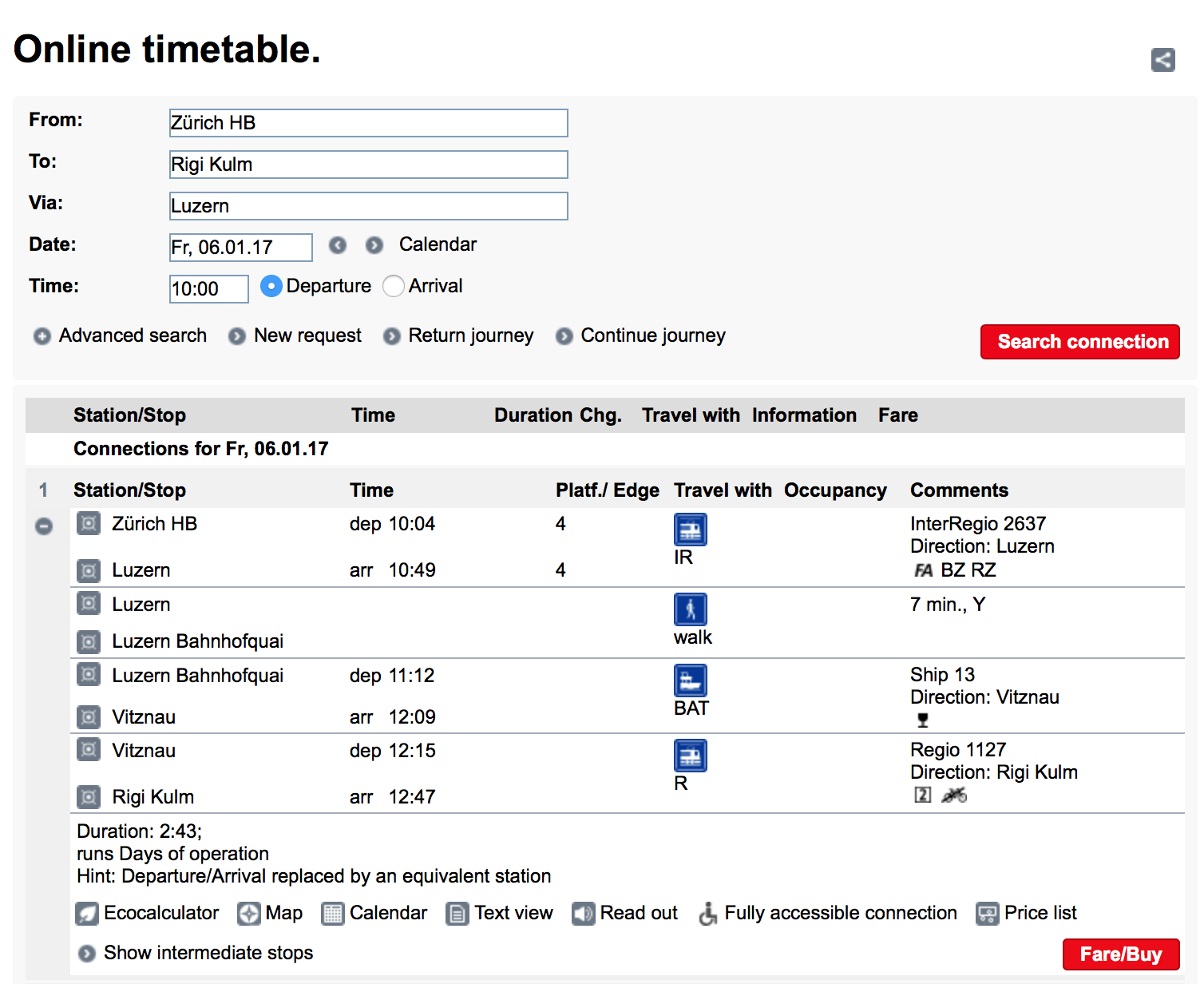 The SBB website shows my actual itinerary. This isn't the first recommended itinerary because there are more direct and faster ways to get to Rigi Kulm from Switzerland, but I wanted to ride in a boat so I added the "via" stop in Lucerne.

What was more fascinating than the legendary on-time performance and convenient and short connection times of the Swiss public transport network was that I bought trips for the boat, two cog railways, and the return train on a single ticket.

I could have bought a single ticket for the entire trip back in Zurich before I departed but I was in a hurry to catch that 10:04 train and it takes a bit longer to buy a multi-stop journey from the ticket vending machines. (You can also buy the ticket on the website and app, which quoted 98 Swiss Francs, or $96, without the return from Arth-Goldau.) 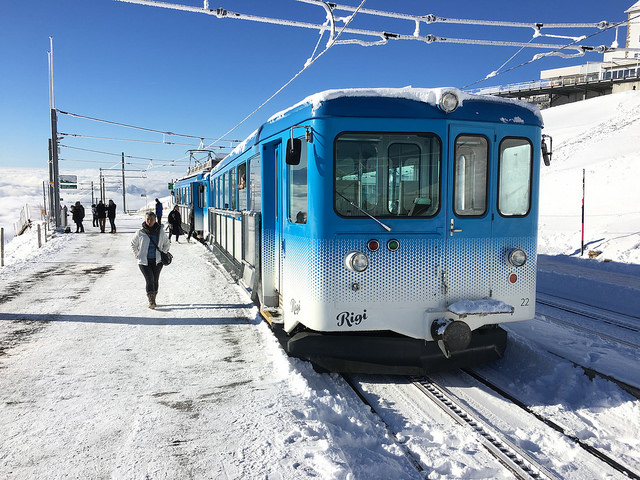 If I had missed the 10:04 train, there would have been another train leaving for Lucerne less than 30 minutes later, but I would arrive about 30 minutes early for the next boat and cog railway because they run less frequently.

On the day I traveled, Friday, January 6, the journey took 2 hours and 43 minutes. I checked SBB's website for this blog post and they recommend a differently, slightly longer journey on weekends, at 3 hours and 1 minute. And they really mean that 1 minute.

The Swiss railway clock's second hand waits at the 58.5 second mark and proceeds when it receives a "minute impulse" signal from the SBB's master clock. Train operators then depart.

Get to know the Swiss timetable

You can take a sesselbahn (chair/ski lift) from Feldis/Veulden to avoid an uphill hike to Mutta; it's operated by Sesselbahn und Skilifte Feldis AG. You can find its two stops and straight route up the mountain in Transitland's Feed Registry.

We're working to import all of them into the Transitland datastore, and we'll get there eventually (it takes a lot of time to add metadata like an operator's metropolitan coverage area and canton). For now, though, we've added the stops and routes for 11 operators, including all of the ones that covered my trip to Mount Rigi.

Edit this map yourself in Tangram Play. These routes were extracted via Mobility Explorer and its direct connection to the Transitland API and I edited some of them because many of routes in the Swiss feed are very simplified.