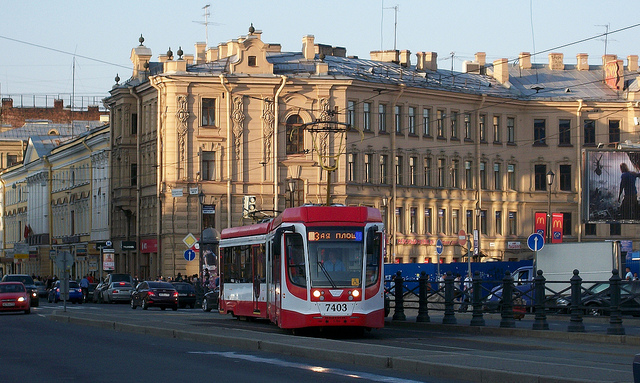 We recently added the feed for surface transit in Saint Petersburg, Russia. ORGP is the transport organizer's name in the Latin alphabet. ORGP website is a central source of information for the various municipally- and privately-operated ferry, bus, and tram routes.

St. Petersburg (SPb) also has trolley bus routes, which drive using electricity they collect from an overhead wire (you'll see these most often in cities around the world with hills, because electric buses are more efficient climbing inclined streets). These buses can only deviate from their route where an intersection between wires is available. There are 1,066 routes in the SPb feed.

I couldn't find ridership information for these routes, but the statistics on the Wikipedia article say that a much higher proportion of SPb residents ride the subway each weekday than people in Chicago ride the 'L'  in my hometown. The 'L' runs mostly on elevated track, but has some subway and at-grade sections.

We don't yet have the GTFS feed for the SPb subway and we could use your help. If you know the URL to the SPb's subway feed, submit it on this form. 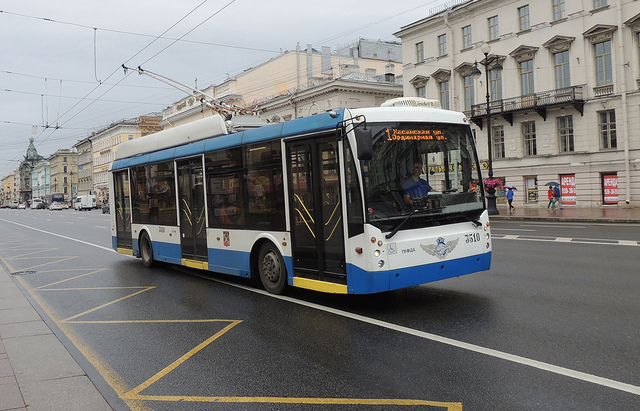 Photo of a trolley bus in Saint Petersburg by Duncan Payne

It's very common see regular length buses with three doors in Europe, while buses in North America often have two doors. Articulated buses often have 3-4 doors, 1-2 more than their counterparts in the United States.

One of the features in Mapzen's new Mobility Explorer, launched in late November, is to drill down into the transit routes, stops, and operators in a city—all of that data is based on what's available in Transitland. It visualizes this data quickly and easily.

Once you're in Mobility Explorer, search for "Saint Petersburg, Russia" and click on the result. On the left sidebar, click on "show routes" and you'll see that all of the routes in SPb will appear in the same color.

A great feature of Mobility Explorer is that it tells you the Transitland API call to get the data in the current map view. You'll find this link under the main "Show [xyz]" buttons in the left sidebar.