July 19, 2022: We appreciate questions and feedback we've received from a wide range of Transitland users about this change. Based on feedback, we are adding a Hobbyist/Academic plan with no cost. Users developing non-commercial applications may use this plan to access historical feed versions through the v2 REST API.

Commercial users who need access to historical feed versions, as well as academic users who require support and/or access to the v2 GraphQL API, are directed to the Professional plan.

See a comparison of functionality on the Transitland plans and pricing page.

(And one more update to this blog post: the count of feed version in the Transitland archive is out of date. Now there are 105,763 :)

Some users are taking advantage of this openness by scraping the entire contents of Transitland's feed version archive. These mass downloads put load on Transitland servers and bandwidth, increasing our operating expenses. It also blurs distinctions between the API free tier (intended to be generous enough for hobbyist projects and pilot projects by companies) and the professional tier (intended to support production projects).

We are adjusting access to Transitland's GTFS feed version archive to better balance these concerns.

This website now allows users to download the latest version of any feed (with the exception of those marked as having licenses that prevent redistribution). Click through to a feed page and you'll see a download icon in the top frow of the table of archived feed versions. For example, the Caltrain feed: 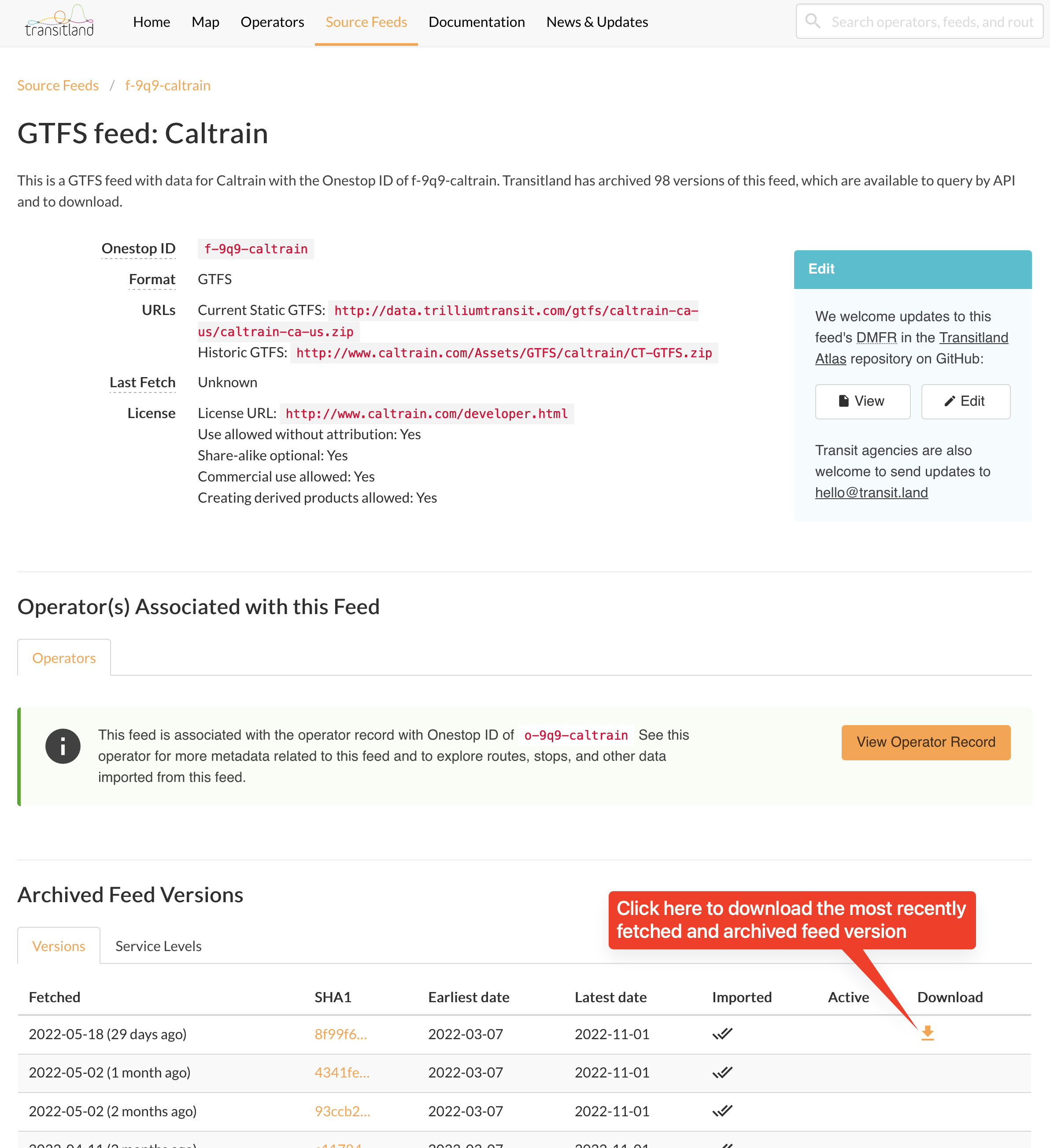 Developers can use the v2 REST API to download feed versions by two means:

Starting in seven days (on Thursday, June 23, 2022), Transitland will only allow users on the Professional or Enterprise plan to download feeds using the second of those options. (As of July 19, 2022, non-commercial users on the Hobbyist/Academic plan are also being given this capability.) All registered developers, including those on the Free plan, will still be able to use the first of those options.

Continuing to tune and improve

We founded Transitland in 2014 to serve as "a community-edited data service aggregating transit networks across metropolitan and rural areas around the world." We've added, adjusted, and removed functionality over time. We've also supported Transitland's expenses and upkeep through a changing mixture of organizational sponsorship, charitable sponsorship, and customer revenue. We expect to continue to adjust Transitland's functionality and access policies over time to maintain and expand this platform as the best possible set of open transit and mobility APIs. Thanks to our users — both old and new, and on both free and paid plans — for making such good use of Transitland.