Since releasing the global transit map and v2 Vector Tiles API last year, we've added a variety of improvements in functionality and in rendering.

The Transitland global transit map and v2 Vector Tiles API are based on tiles in the MVT (Mapbox Vector Tile) format. We've made a number of changes to the data that's encoded into each MVT tile for route geometries. The changes are small but add up to a meaningful decrease in the size of the tiles and an increase in rendering performance. These improvements are especially useful at zoomed out (small scale) views: 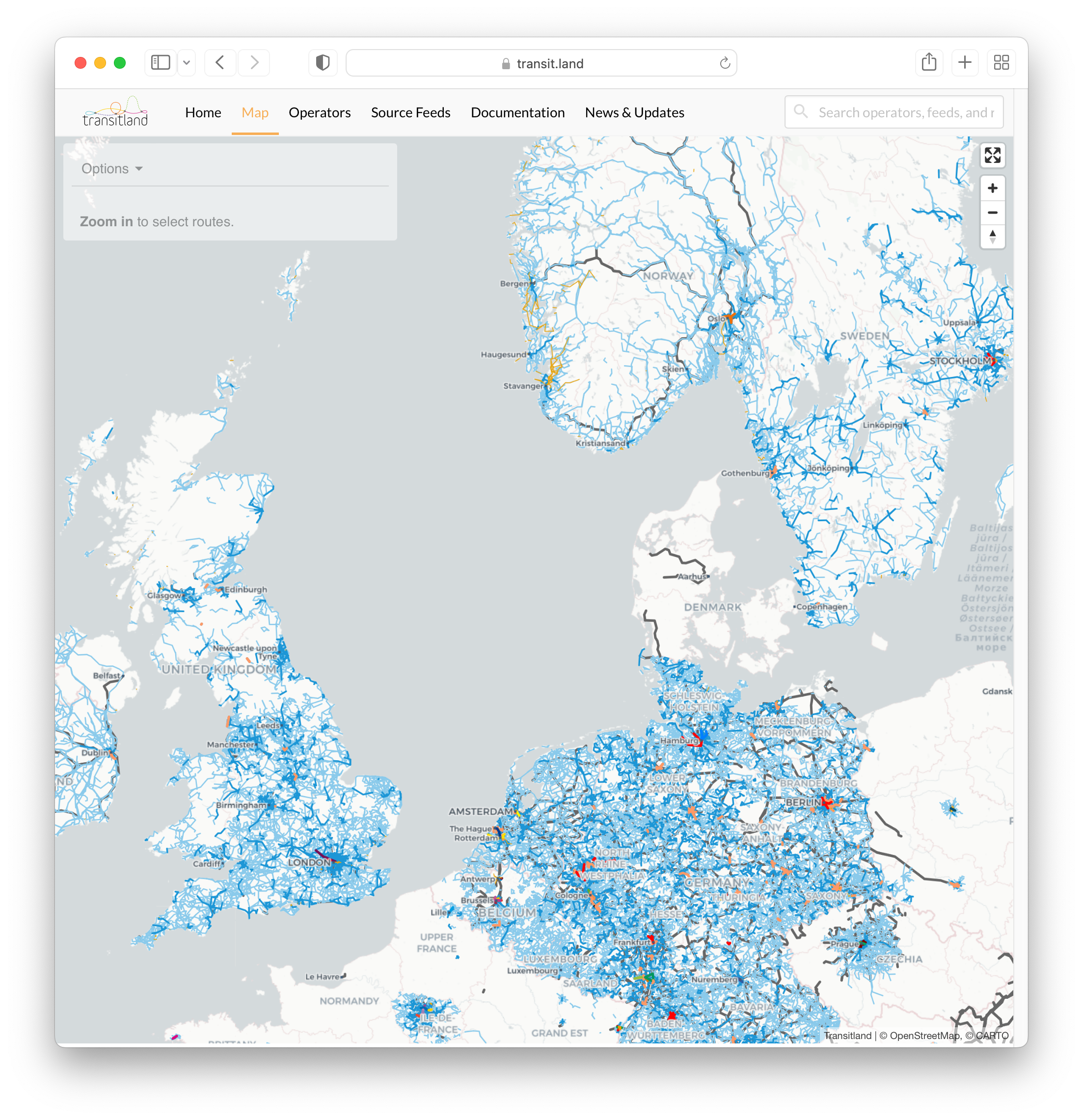 While some transit routes are simple, with all trips following the same line, other transit routes can be very complicated. Routes may have trips along certain lines at peak hours and along other lines at off-hours. Routes may branch and go in multiple directions depending upon the trip. Many different combinations are possible all under the same branding of a single route name.

When a source feed does not provide shapes.txt for a given trip, Transitland generates "stop-to-stop geometries" by drawing straight lines between stop locations.

The representative geometry for each route is created using the following rules:

Creating high quality shapes.txt records in GTFS feeds can be a challenge. Occasionally agencies do make mistakes. For example:

Transitland's goal when importing from shapes.txt is the same as our overall goal with GTFS source feeds: We aim to import as many records as possible, while ignoring records that are invalid or that are of such low quality that they will not be usable. Transitland continues to import the overall feed, even if it must leave out some records.

(Transitland's import strategy is in contrast with validators and tooling that are used by agencies when generating GTFS — for those types of use-cases, the user may wish to have the process fail an entire feed when one of its entities causes a problem. The operator will then fix the feed before repeating the validation process.)

Problematic geometries are still included in the MVT vector tile data, but the global transit map hides these geometries by default. To see them, open Options and select Show problematic route geometries:

A typical tile set contains over 150,000 routes! This can be expensive to load and render at low zoom levels, so some compromises are baked into the tiles. Vector tile zoom levels 8 and higher include the full MultiLineString representative geometries and all route features. Tile zoom levels between 0 and 7 include a single LineString geometry for each route, and on particularly dense tiles, a percentage of route features are dropped to help manage the file size of each tile (routes with high levels of service are weighted towards inclusion). Zoom levels 0 to 13 include line simplification appropriate for displaying at that zoom level; zoom level 14 includes the full, unsimplified geometry.

Can you use Transitland vector tiles in desktop GIS software? Thanks to a curious user for asking this question. Turns out the answer is yes.

If you want to use Transitland route lines and stop locations as layers in your own GIS map, along with your other data sources, here are instructions for how to do so in QGIS: 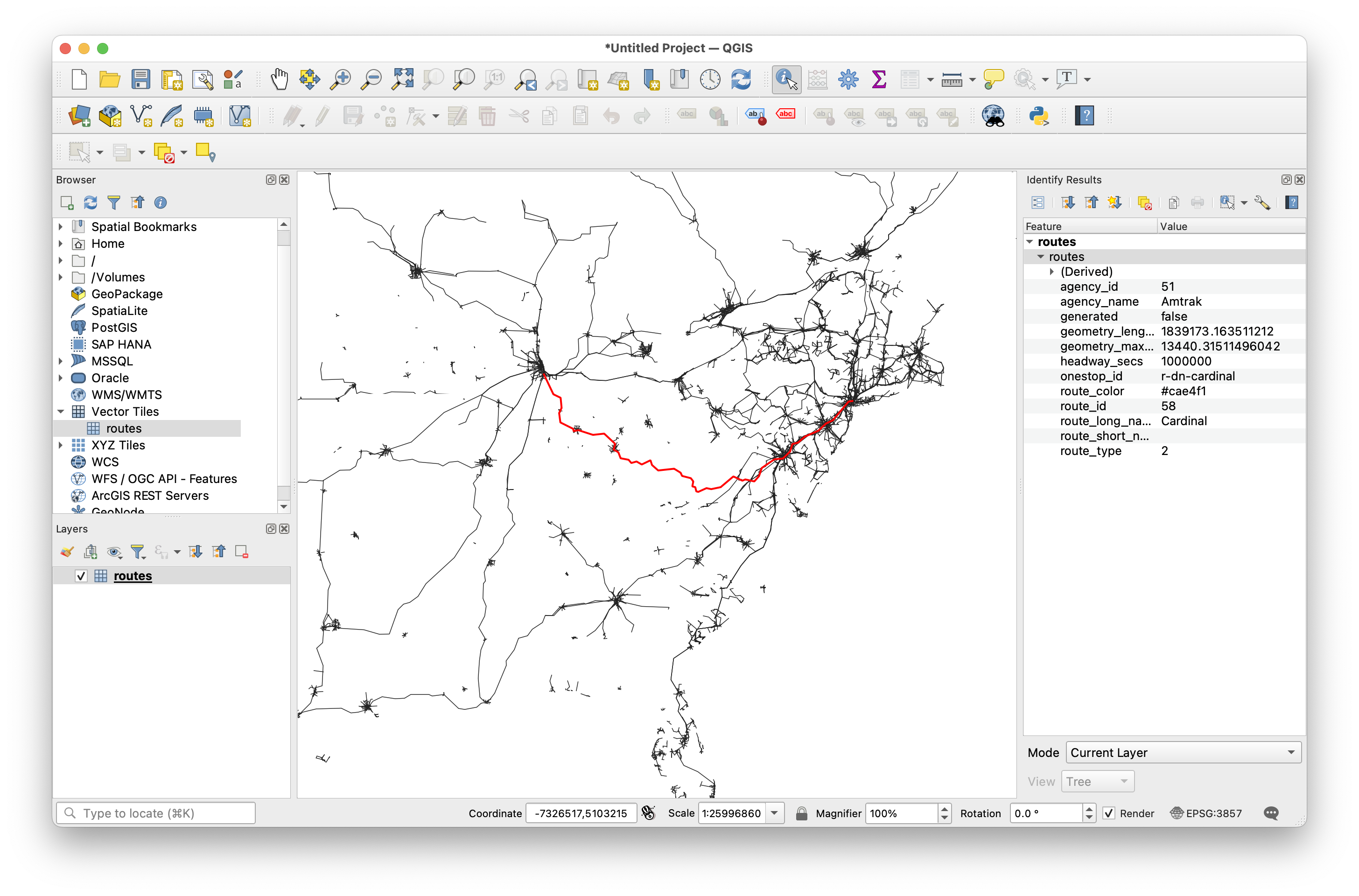 We look forward to seeing what GIS users, software developers, and data analysts create using these enhanced transit map tiles. We welcome all to post their creations on Transitland's "show and tell" discussion board.