Rio de Janeiro, host of the 2016 Olympic Games, is a city of buses 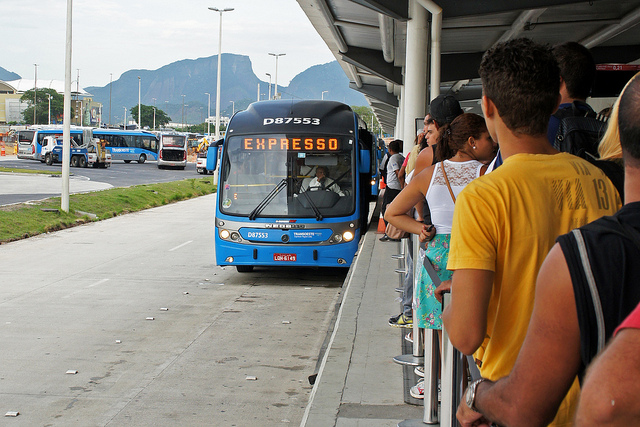 The TransOeste BRT line was opened in 2013, and now services the Olympic Park and Village in Barra da Tijuca. Photo by mariordo59.

A new subway line opened in Rio de Janeiro one week before the 2016 Olympic Games opening ceremony. "Linha 4" was the final piece of Rio's Olympics transit strategy. In a media report last year, construction was "down to the wire" and the line was supposed to open five weeks before the games. The line joins Linhas 1 and 2 in Rio's "Metrô" system, but isn't open to the public yet.

For the first week of the Games, running through September 19 when the paralympics ends, riding the trains is restricted to athletes, ticket holders, press, and staff. Also during this time, only five stations are open – the sixth station will open in 2018.

Rio de Janeiro has more transit modes than most cities. A funicular – specifically a rack railway – takes tourists up to the Christ the Redeemer statue, and aerial cable cars lift sightseers to the top of the Pão de Açucar mountain.

The city has a vintage tram, light rail, subway, commuter rail to the suburbs, ferries, and local buses (both with and without air conditioning). Rio, like most large cities in Latin and South America, has BRT, or bus rapid transit, a bus innovation invented in Brazil that uses buses to provide subway-like service on exclusive roads.

The opening of Linha 4 a week before the Olympics wasn't the only close call. The city's new light rail train opened in June. The VLT Carioca – Carioca is the demonym for someone from Rio – takes riders on several routes in the city center, including to the airport and port.

We're still looking for transit feeds for the trains and ferries, but we have data for 378 bus routes. If you know where any of these feeds live, become a Transitland contributor and submit it on our form. Se você conhece o URL de feed torne-se um contribuidor e o envie em nosso formulário.

Fetranspor provides a combined feed for all of the local bus routes operated by the many companies with concessions to provide public transport services in the state of Rio de Janeiro.

The feed for Fetranspor was submitted to Transitland before the Olympics, but the impending opening ceremony last week was an impetus for me as the independent reviewer of incoming data to try increase coverage of Brazil on Transitland.

Someone else submitted a feed for transit in São Paulo, the largest city in South America, but because the city's data portal requires registration before showing links to the GTFS feed, we are hosting it on a designated GitHub repository until we can find a better solution. If you know of a feed that isn't hosted publicly, we may be able to host it, too.

Transitland also maps out transit routes and stops in Belo Horizonte, the capital of Minas Gerais, a state north of São Paulo, and Porto Alegre in Rio Grande do Sul.

A practical way to use Transitland's limited transit information for Rio – which I hope to increase soon – is to combine it with point of interest data from OpenStreetMap. For example, make a map of all of the bus routes and stops that can pick up riders within a short walk of the Maracanã stadium, a 66-year-old futebol (soccer) stadium that hosted the 2014 World Cup and the opening ceremony of this year's Olympics. With this short tutorial we can find bus stops near each of the Olympic Games venues.

First, let's find Maracanã stadium using a simple query on Overpass Turbo. Overpass is a service that queries OpenStreetMap for specific kinds of places, and Overpass Turbo is the web interface. Once we know where the stadium is in the world, we can provide that information to the Transitland API and discover nearby transit options.

Finding bus stops near the stadium